The goal of care is to facilitate healthy aging. 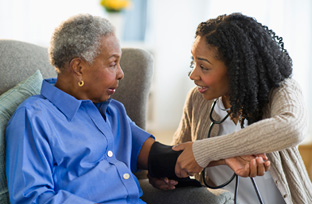 With better understanding of HIV disease and improved treatment options, people living with HIV are surviving much longer than was previously possible.

For such individuals, the goal of care is to facilitate healthy aging. Integrating disease prevention and management of this wide range of issues will be a challenge to clinicians and HIV support services. Healthcare providers caring for people living with HIV must be knowledgeable not only about HIV treatment but also about the management of other comorbidities in the context of HIV.

HIV-related disease may be associated with a premature aging syndrome, described by multisystem dysregulation and increased vulnerability to stressors. Frailty is defined by having three or more of the following: weight loss, weakness, exhaustion, slowness, or low physical activity. Frailty in HIV-infected persons is associated with increased comorbidities and hospitalizations, but may be treatable or preventable.

Defined by the World Health Organization (WHO) as the provision of biomedical, behavioral and social health interventions to women and couples before conception occurs, aimed at improving their health status, and reducing behaviors and individual and environmental factors that could contribute to poor maternal and child health outcomes. Its ultimate aim is improved maternal and child health outcomes, in both the short and long term.

HIV enters the brain early after the initial infection. It can persist in the central nervous system (CNS) for a long time, inducing multiple symptoms of motor, cognitive dysfunction, and behavioural changes in a significant proportion of people living with HIV. Simple screening tools are available to assess cognitive function and are recommended by several organizations.

Illicit drug use is highly prevalent in people living with HIV (PLWHIV). Some drug users have a long history of undiagnosed mental illness. Some mental conditions may result from, or be exacerbated by the use of substances such as opioids, cocaine and alcohol.

What Questions Should I Ask My Cardiologist?

HIV and the Mouth: Oral Health Problems of HIV